Chef’s Note: Hey, it’s our one-year anniversary here at Superheroes Eating Food! To be honest, I never expected for it to go on for so long. And – it’s okay to be honest – neither did you.

When I first started this very important scholarly endeavor, I was looking for something to take my mind off the pandemic, something I could turn to when the news of the world got to be too much. What would be the perfect distraction?

Since being a kid, there is one thing I have always enjoyed doing: finding someplace quiet where I could kick back to read a stack of comics. What made it even better was having a nice snack to go along with it. When I was young, it was usually an English muffin pizza along with some Hi-C.

Nowadays, it’s generally a dram or two of some nice Scotch… and an English muffin pizza. Some things change, and some stay very much the same.

When I realized I had already perfected this perfect distraction with a lifetime of practice, it became clear what my pandemic project would be. Finally a reason to use my degree in Comic Book Food Archaeology!

So that’s how this little piece of interweb whimsy came to be. I’m not sure if anyone other than myself has enjoyed or found interest in it. Still, it continues to provoke my interest and enjoyment, and what more does a whimsy need really?

To celebrate this most auspicious and unexpected anniversary, let us partake of a smorgasbord of Spider-Man and hot dog scenes! 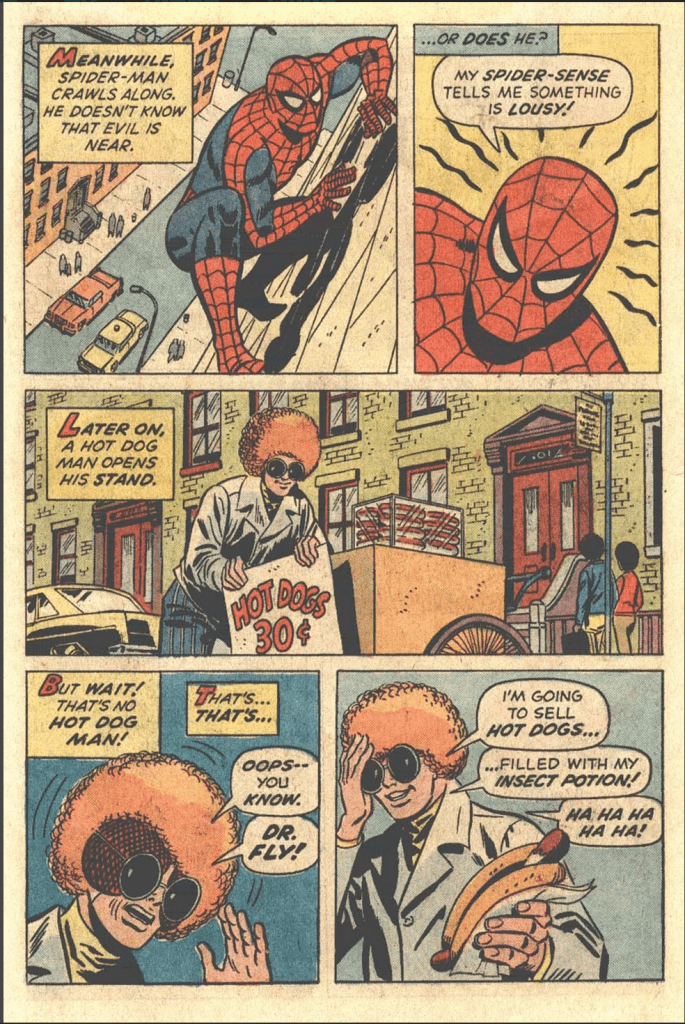 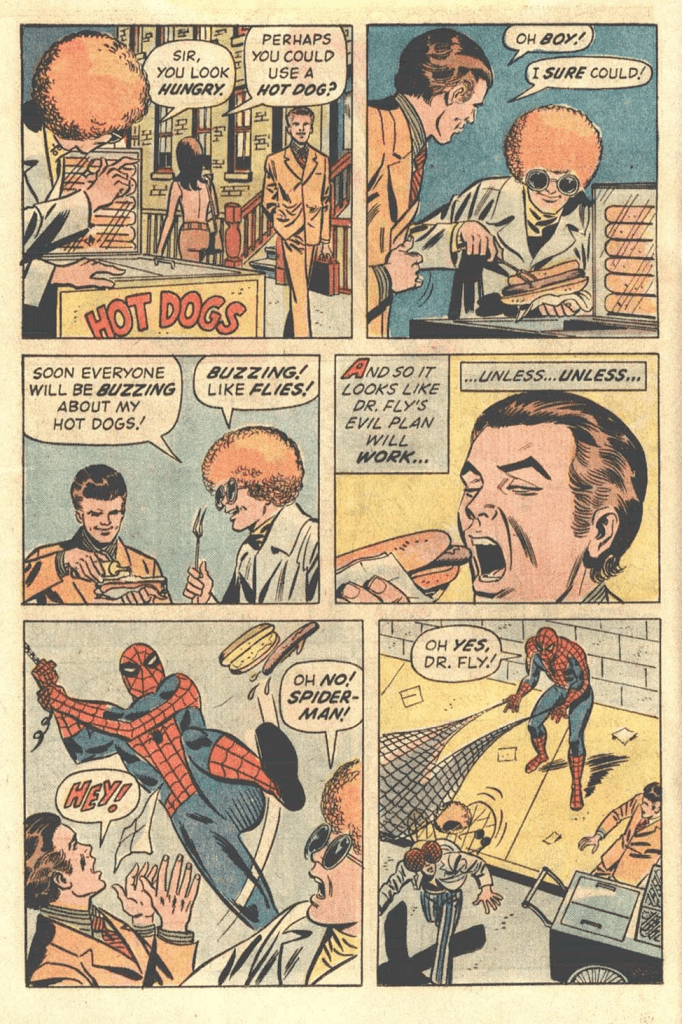 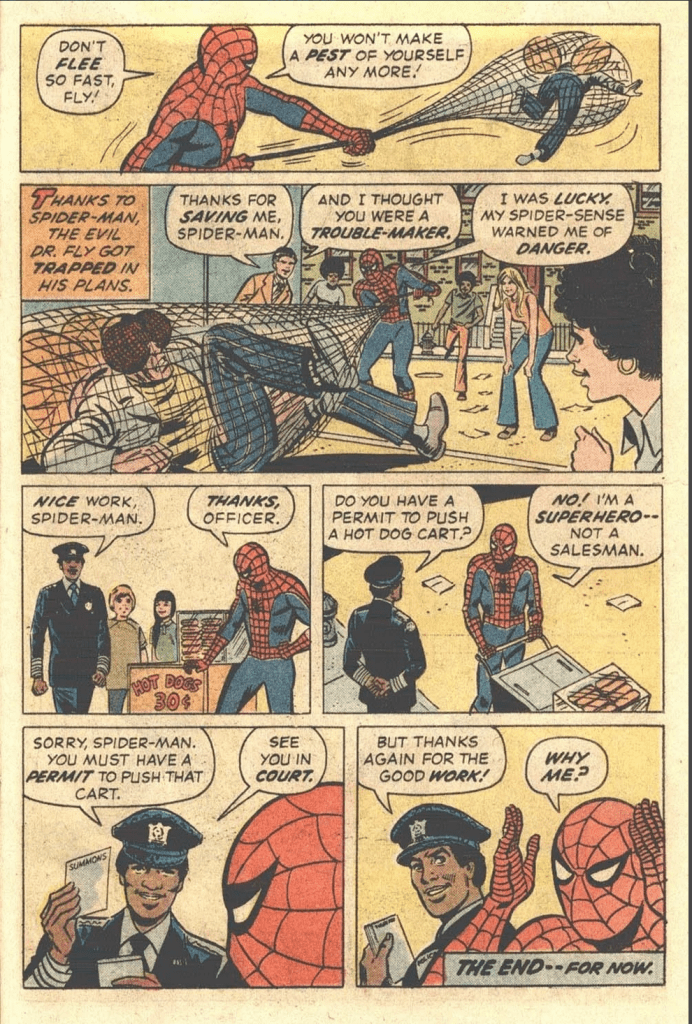 Chef’s Note: Weaponizing hot dogs with an insect potion? That is pretty much the definition of dastardly – after all, who could resist? Dr. Fly is obviously a disturbed individual who should not be allowed to operate a food cart.

Speaking of which, I’m no legal expert, but I’m pretty sure that the citation Peter received would not hold up in court. Still, it was pretty petty of Officer Friendly to issue it in the first place.

Luckily, as we know, action is Peter’s real reward. 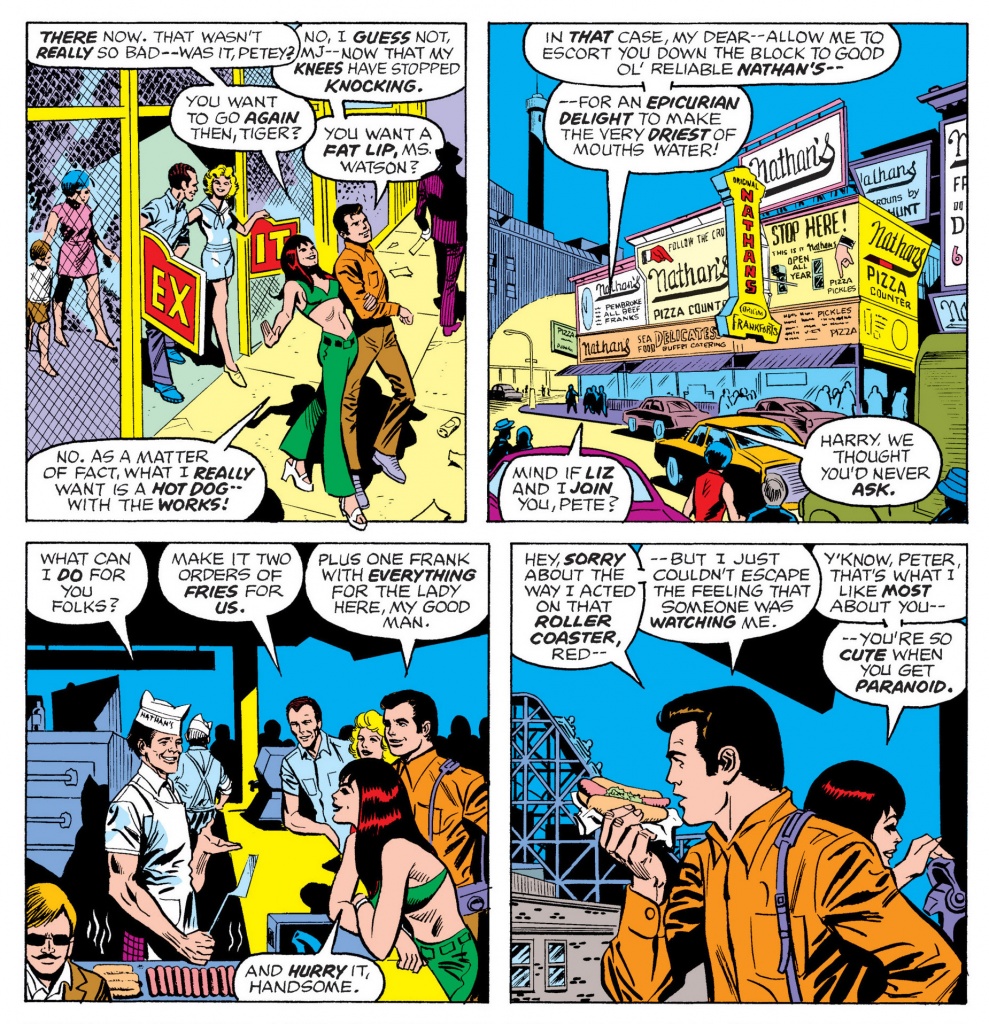 Chef’s Note:  Yet another example of a superhero stealing food: Peter orders MJ a frank with everything and then goes ahead and eats it himself. MJ deserves better, Peter!

Chef’s Note:  Nathan’s Famous has been serving up world famous frankfurters on Coney Island since 1916! 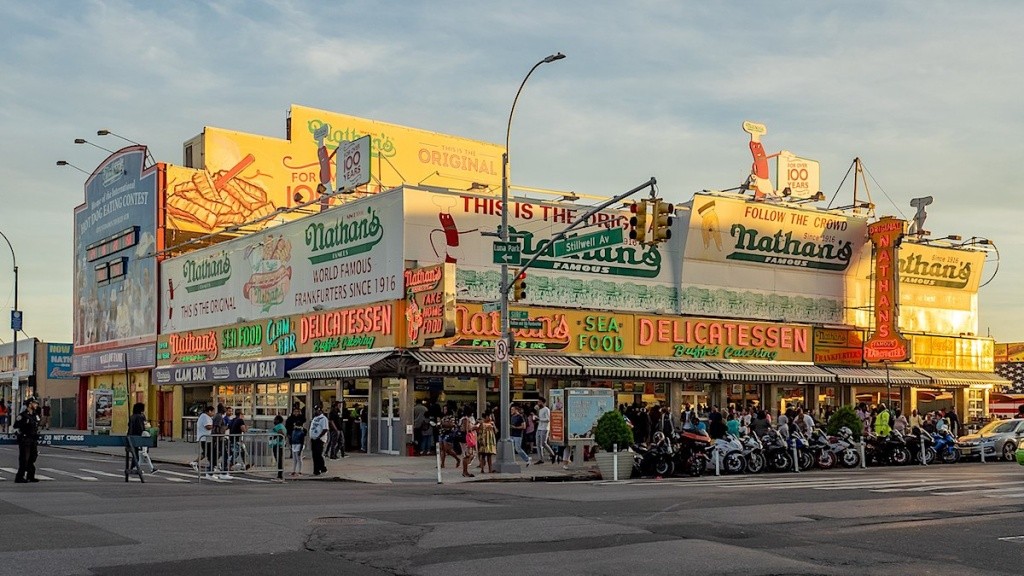 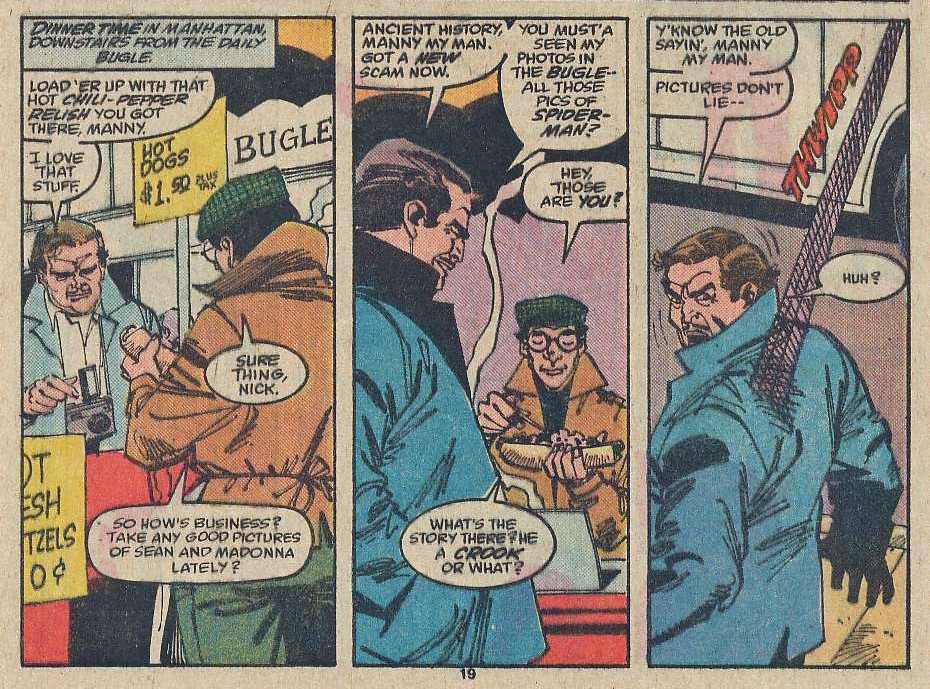 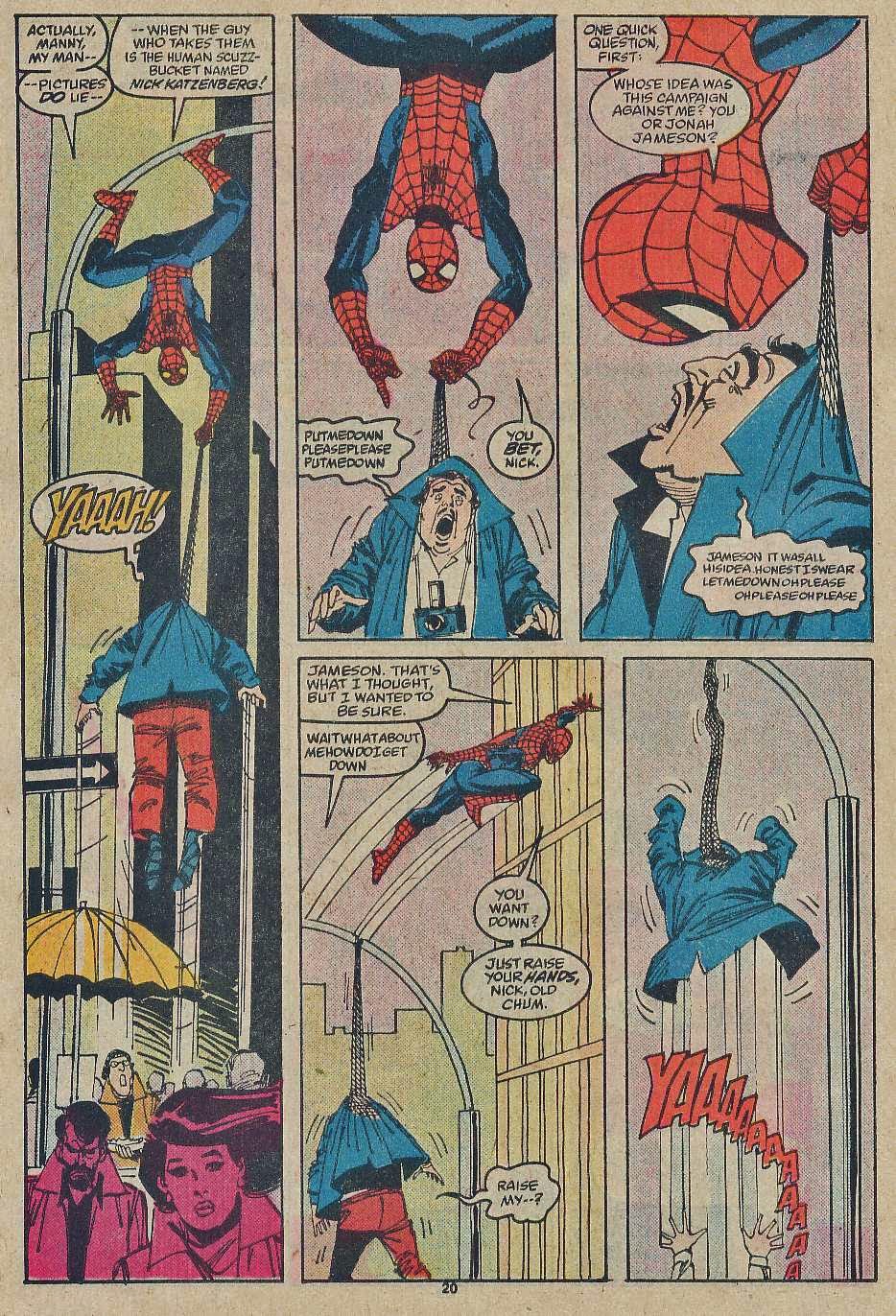 Chef’s Note: This is not an example of superhero food theft, per se. But there’s no arguing that Peter does ruin this man’s lunch. And cause him to litter – chili pepper relish all over the sidewalk!

As a 21-year-old, Turco envisioned starting a hot dog stand that would bring more people down to the Sheridan Park area. His father suggested he offer something different. Louie’s answer: Give them more.

But nobody had heard of a foot-long hot dog in 1951, and Louie had trouble convincing local meat-packing companies to make them for his new venture. After futile visits to several companies, Turco went to the former High Grade Meat Packing Co. on Washington Street where the head of production agreed to take a chance on a new product.

The foot-long hot dog was born. 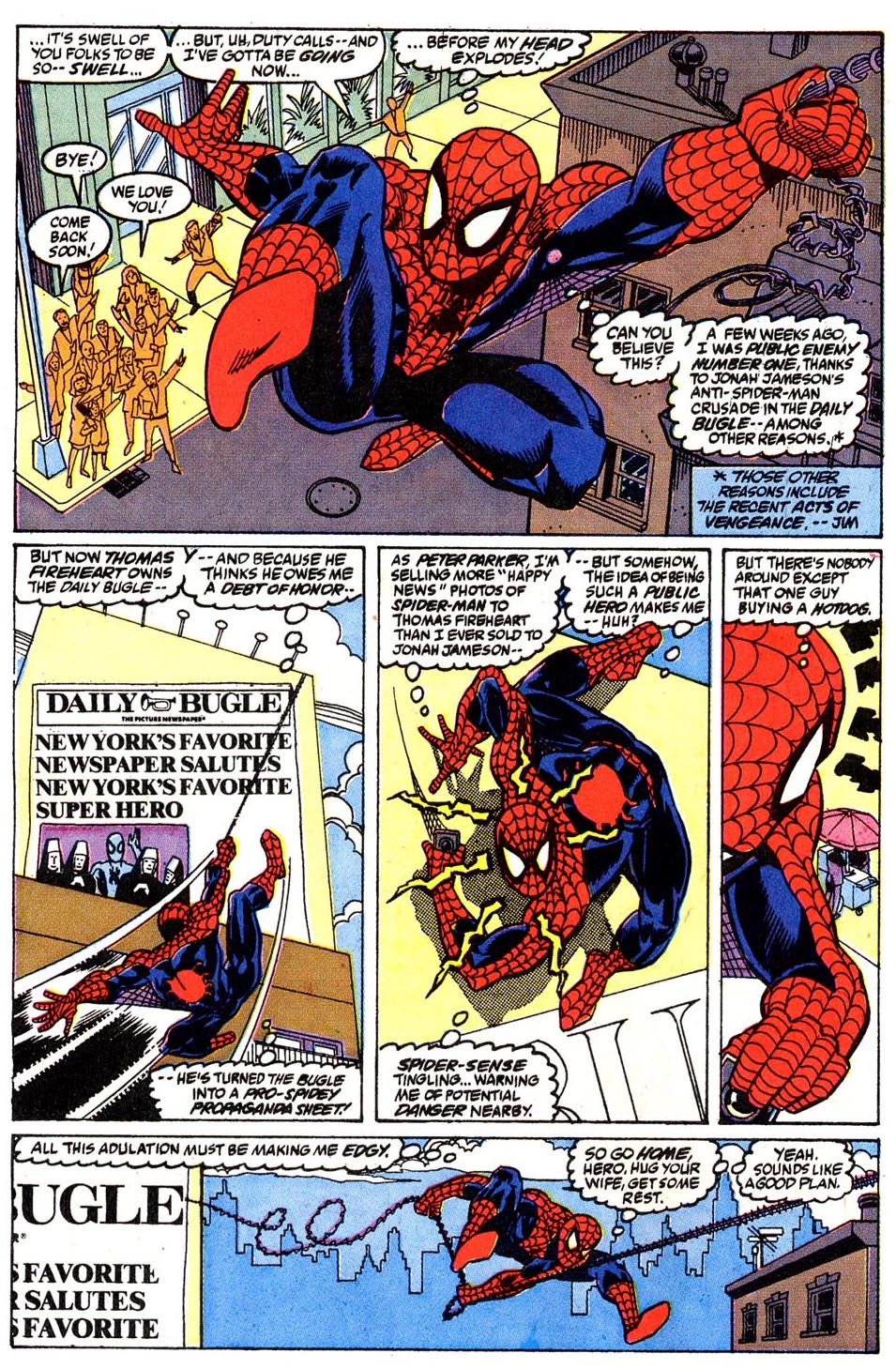 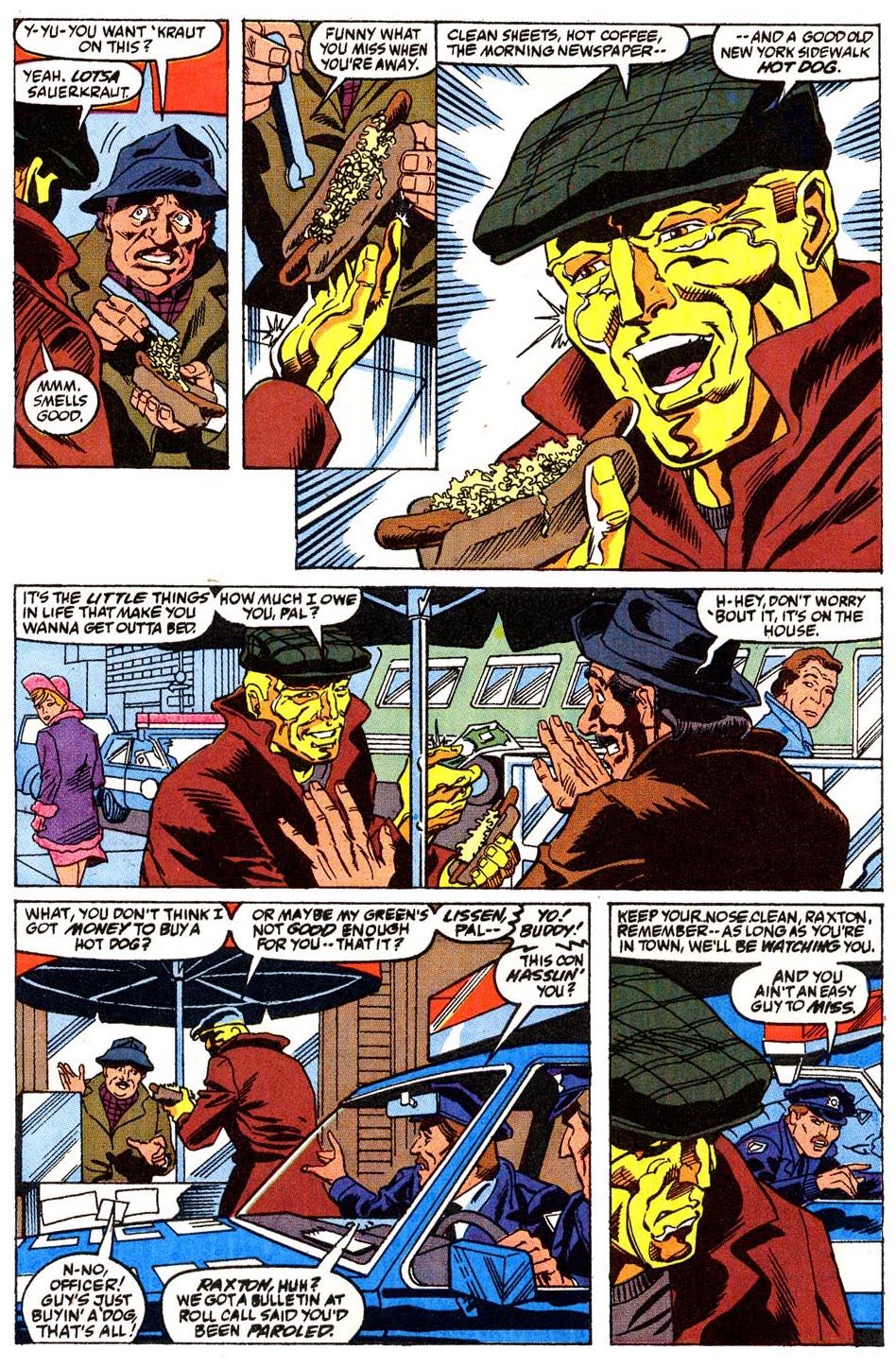 Chef’s Note:  Peter might be a smart guy in terms of science, but he isn’t always that swift where inductive reasoning is concerned –

But there’s nobody around except that guy buying a hot dog.

C’mon, Pete – supervillains need to eat too. It could have been the hot dog vendor as well. Do you remember nothing from your encounter with Dr. Fly (see above)? 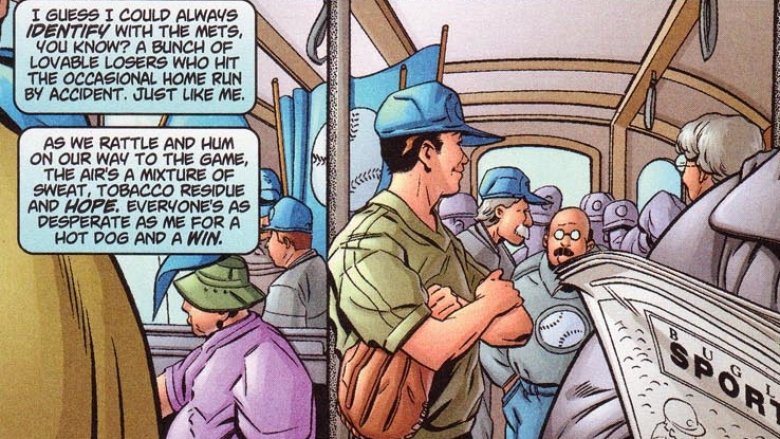 Chef’s Note:  Well, its the Mets, so it’s unlikely a win will happen. Which frustratingly enough, is also what happens with Peter having a hot dog in this comic. Do we ever get to see him eat one? 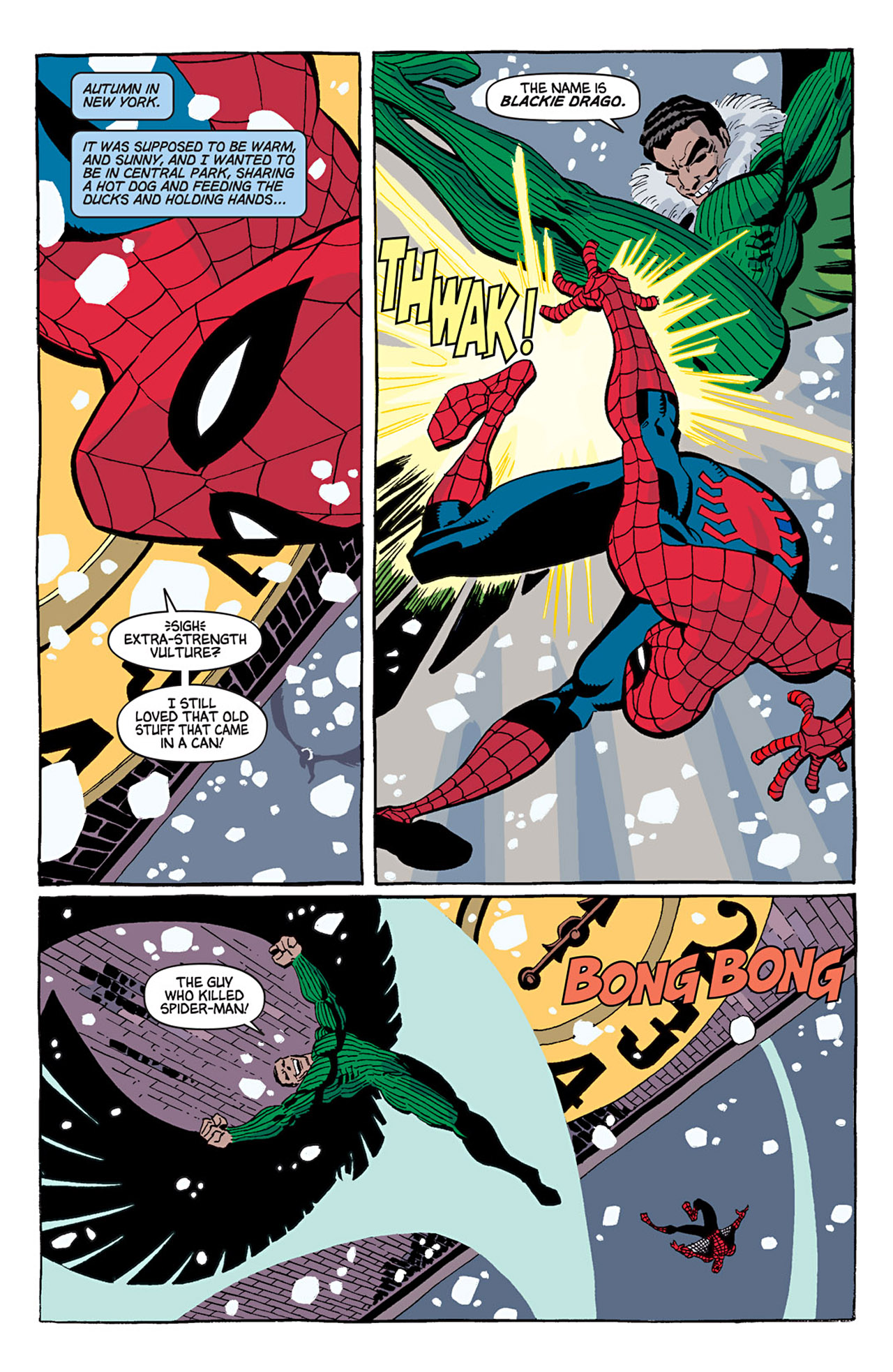 Chef’s Note:  While there is no actual eating of hot dogs in this scene, I found it worth noting that, even when hot dogs are not physically present, they are still on Peter’s mind.
Also, it reminded me of another superhero waxing poetic about walking in the park with the woman he loves, noshing down on his favorite street food. 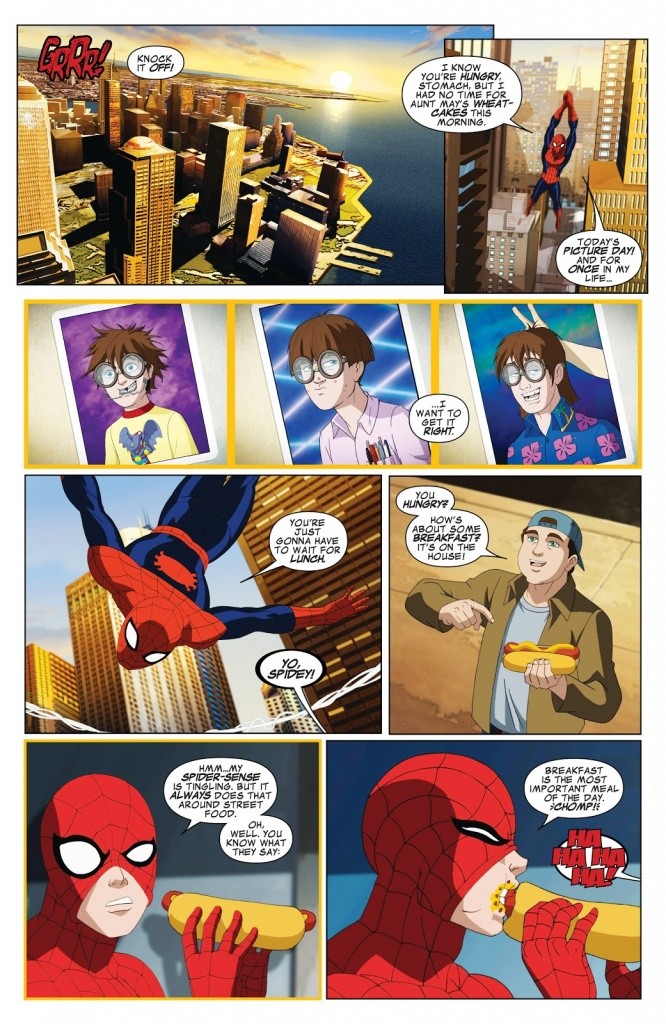 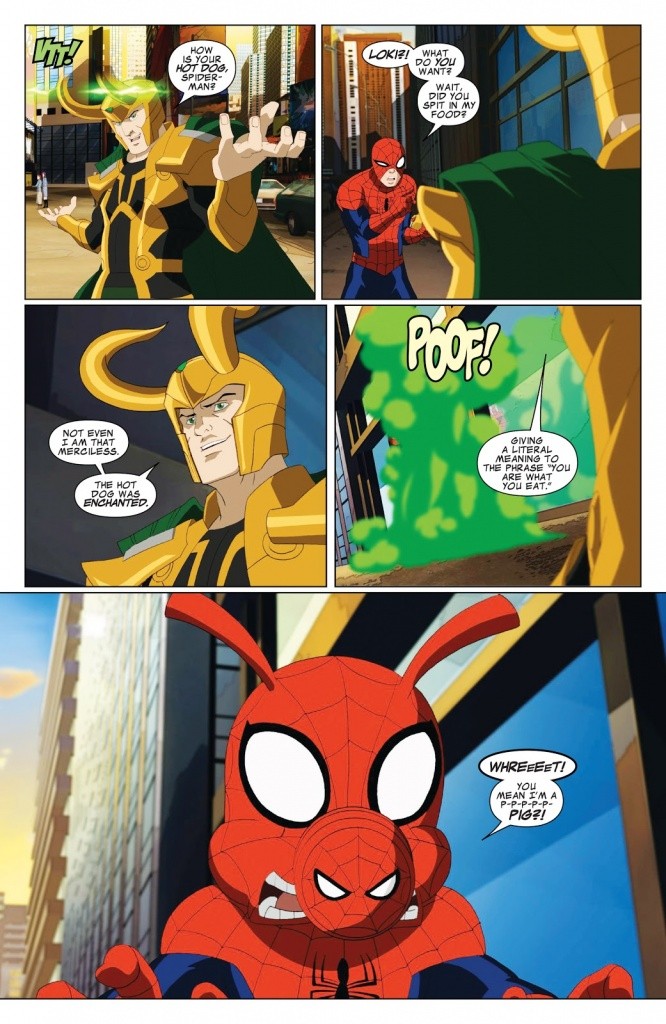 Chef’s Note:  I like that Loki notes that spitting in another person’s food is beyond the pale even for one as notorious as the God of Mischief.

‘You are what you eat’ emerged in English in the 1930s. That’s when the American nutritionist Victor Lindlahr, who was a strong believer in the idea that food controls health, developed the Catabolic Diet. That view gained some adherents at the time and the earliest known printed example is from an advert for beef in a 1923 edition of the Bridgeport Telegraph, for ‘United Meet [sic] Markets’: “Ninety per cent of the diseases known to man are caused by cheap foodstuffs. You are what you eat.”

In 1942, the phrase entered into the public consciousness when Lindlahr published You Are What You Eat: how to win and keep health with diet. Lindlahr is likely to have also used the term in his radio talks in the 1930s to 50s (now lost unfortunately), which would also have reached a large US audience.

The phrase wasn’t much used in the years after Lindlahr stopped his radio broadcasts in 1953 but got a new lease of life in the 1960s hippie era. The food of choice of the hippie champions of the ‘you are what you eat’ idea was macrobiotic whole-food and the phrase was adopted by them as a slogan for healthy eating. 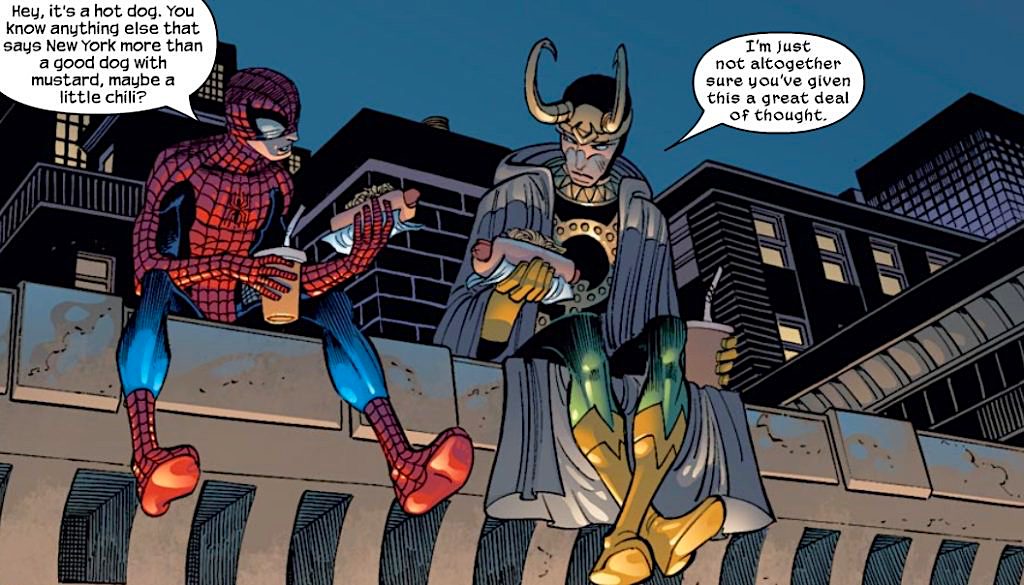 Chef’s Note:  Still my favorite out of all these. 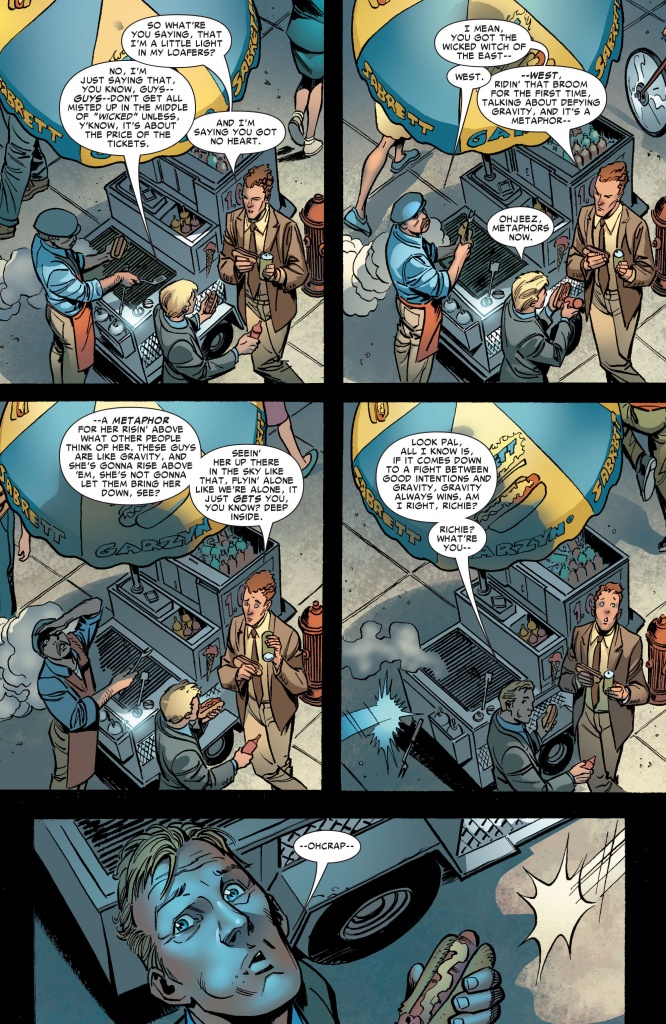 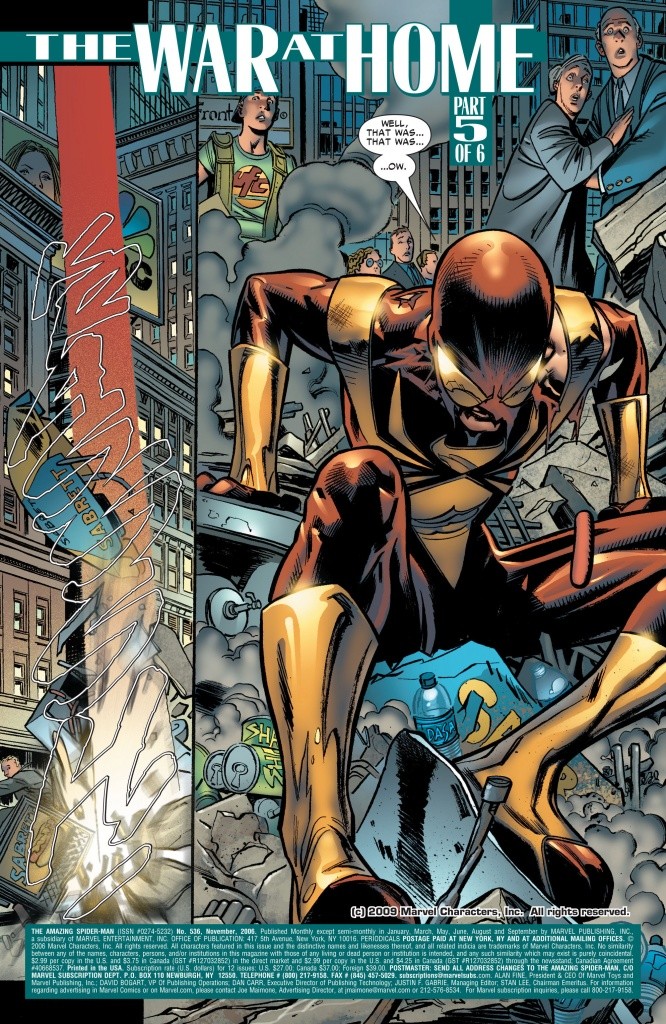 Chef’s Note:  Again with the food crime! Here we see Peter completely demolish an innocent Sabrett’s hot dog cart. Does Peter apologize or try to make amends? No, he does not. He gets in a big stupid fight with Iron Man instead.

Not cool, Peter. That guy has a rental agreement for that cart that he is now on the line for. Do you know how much a hot dog cart costs?!

The other day we noted that superheroes often must forgo many things, even a lunch-time hot dog, should the call of duty arise. Here we see the counterpoint. 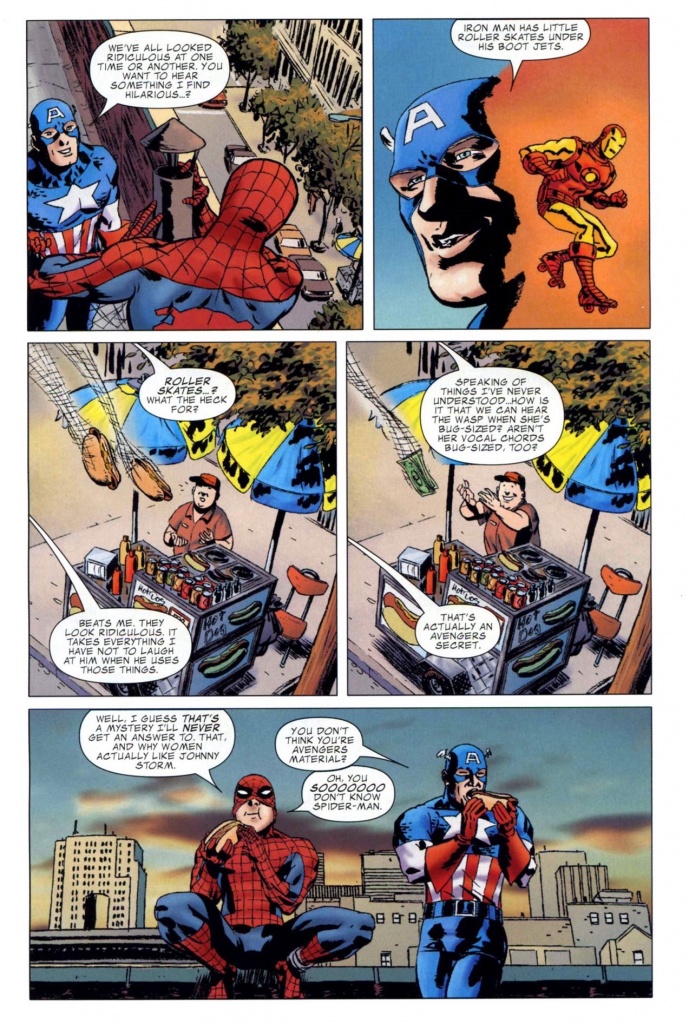 Chef’s Note:  It is comforting to see that Peter does not always simply steal a hot dog when he wants one. Then again, maybe it’s just because Steve is there – no one wants to look bad in front of Captain America.

Chef’s Note:  Perhaps I’m being unreasonable, but I just don’t think webbing would make a good condiment on a hot dog. Call me picky. 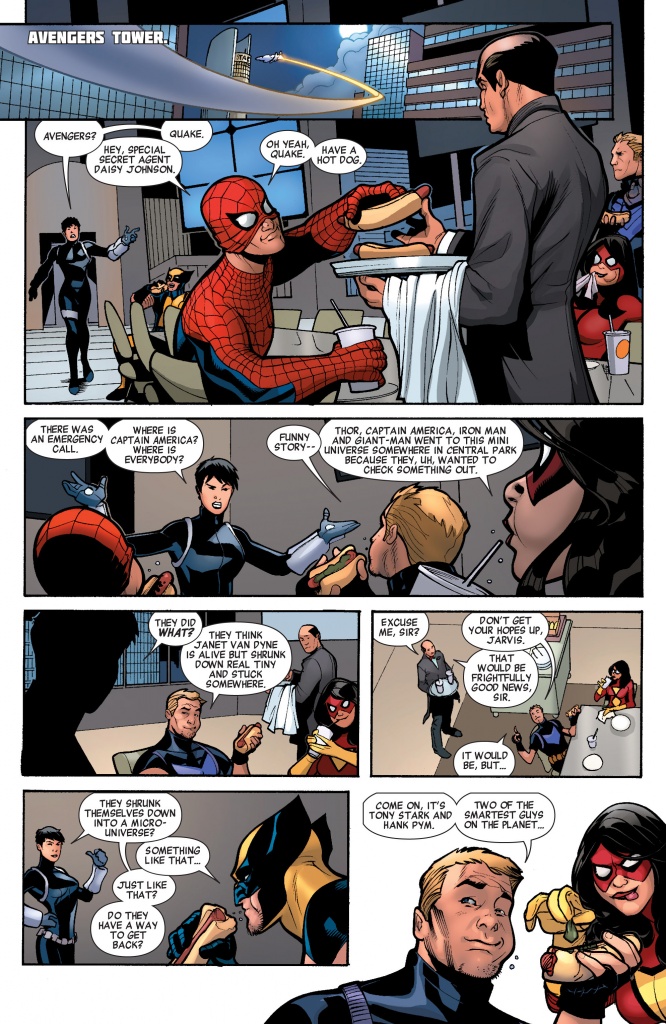 Chef’s Note:  The main thing to note here is that Jessica’s face in every single panel is hilarious.

Chef’s Note:  Along with, of course, more blatant food theft. What exactly is she stealing from Clint’s hot dog? I’m going to go with “green bits“. 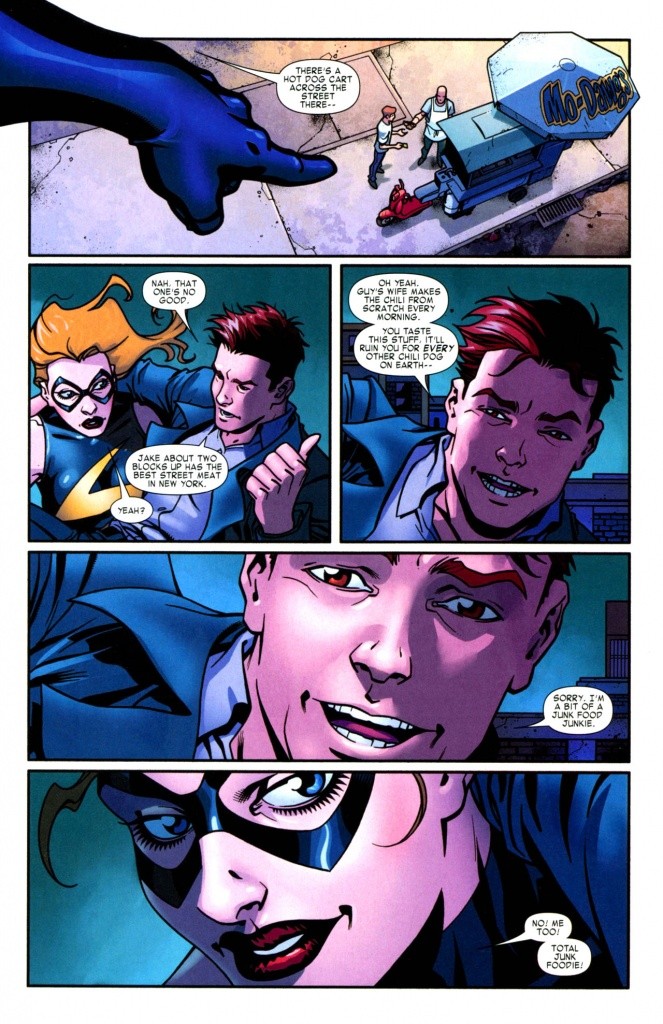 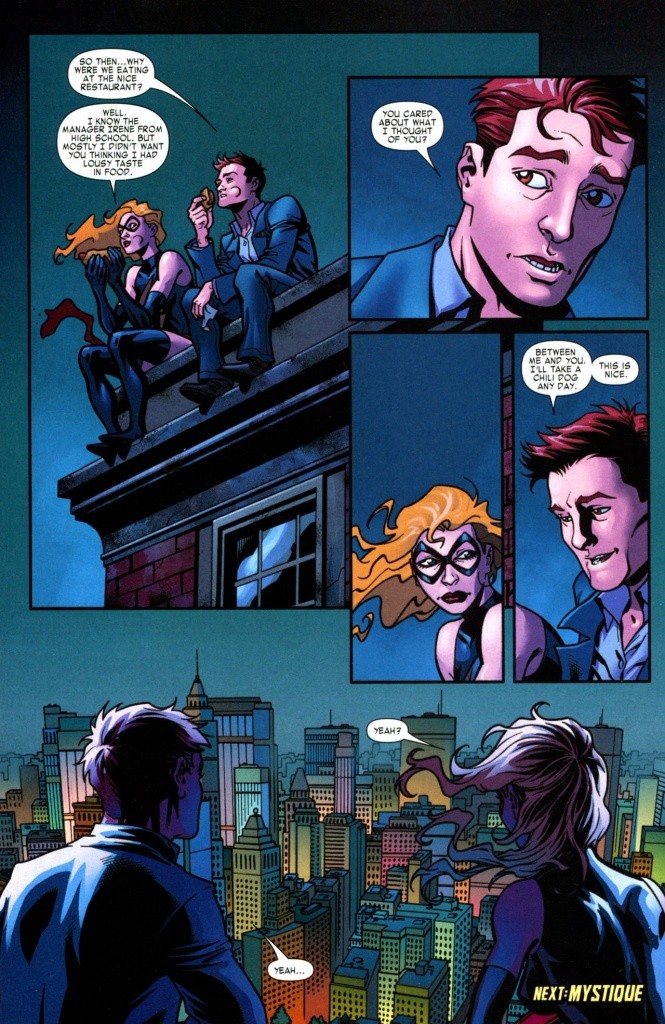 Chef’s Note:  It is impressive that Peter instantly knows which hot dog cart is the better choice given their current location. Of course, given his hot dog obsession and his constant patrols of the city, it is likely that Peter knows more about hot dog vendors than anyone else in NYC.
I think this presents an excellent opportunity/excuse to add some new lyrics to his signature song! If for other reason than to use the term “street meat“. 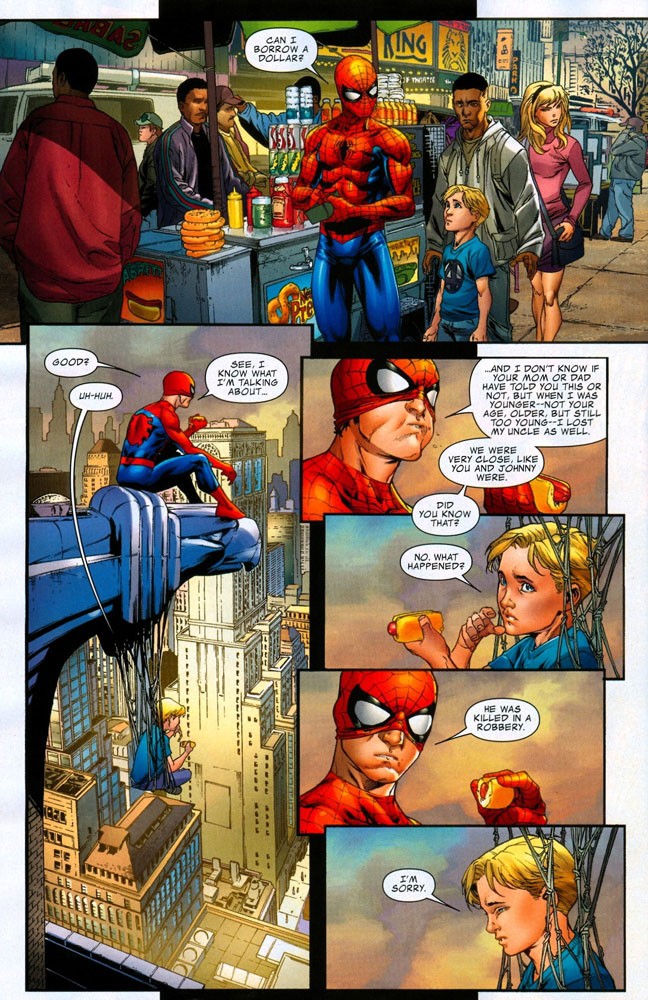 Chef’s Note: Here is a charming scene where Peter strong-arms a child into buying him a hot dog, and then proceeds to make him sad by telling the Uncle Ben story again.

I’m beginning to think J. Jonah Jameson may be right. 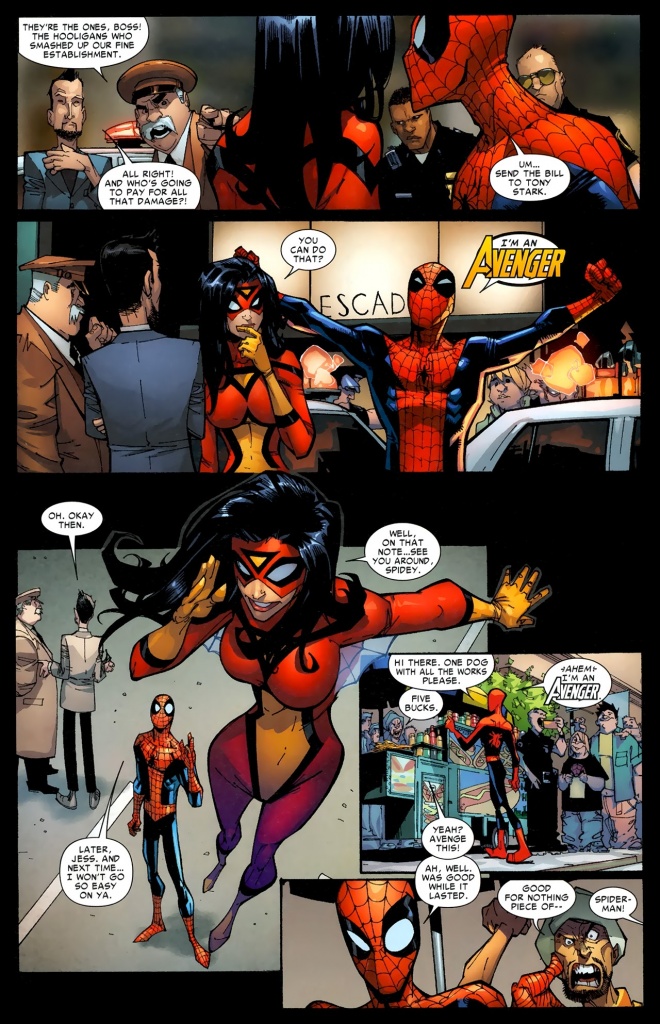 Chef’s Note:  Yet another food crime! Here we see Peter attempt to use his Avengers membership to try to get a free hot dog. First of all, that hot dog vendor needs to make a living, Peter, and he’s not going to do so handing out free dogs every time one of any of the many dozens of Avengers happens to chance by. Second of all, I believe that’s called Misuse of Position and is an actual crime-

An employee may not use his official position, including information learned by virtue of his position, for his personal benefit or for the benefit of others.

An employee may not use his public office for his own private gain or for that of persons or organizations with which he is associated personally. An employee’s position or title should not be used to coerce; to endorse any product, service or enterprise; or to give the appearance of governmental sanction. 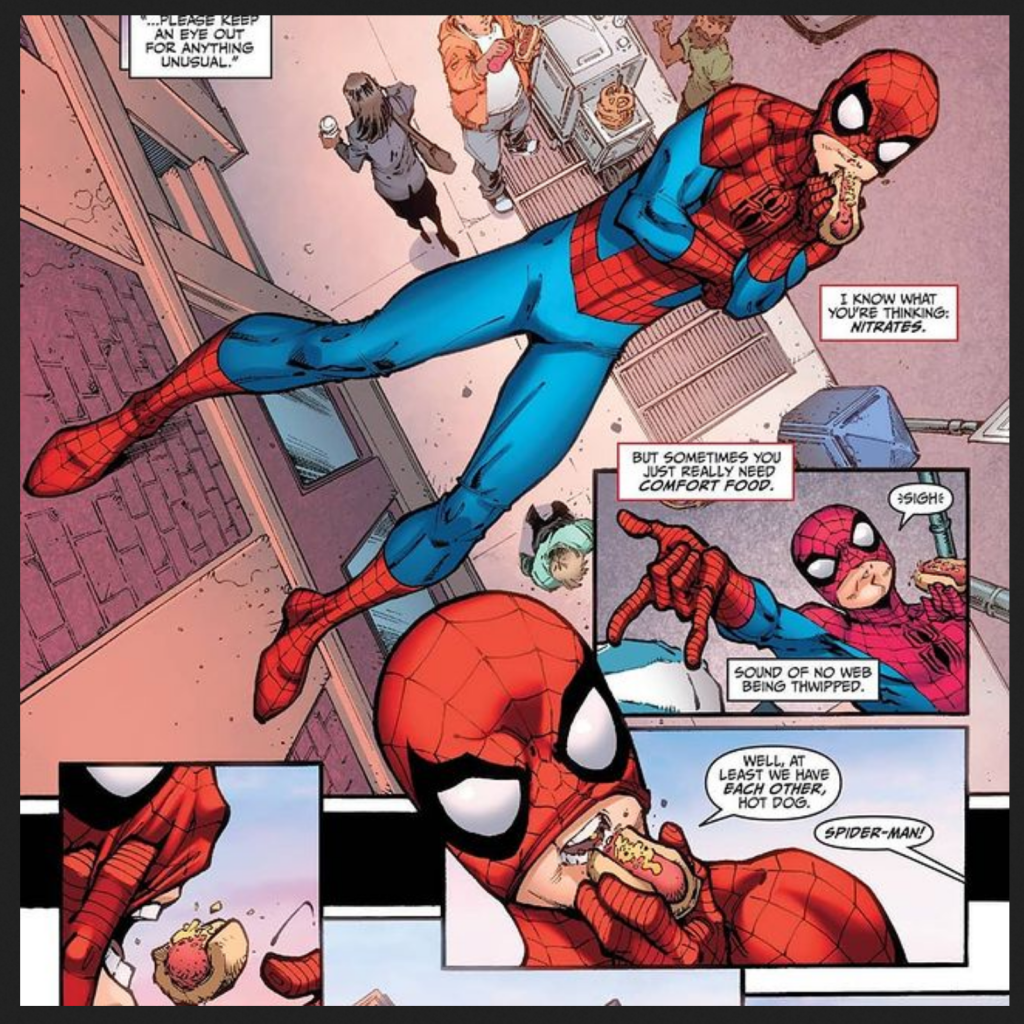 Chef’s Note:  Ah, nitrates! As deliciously salty as they are carcinogenic!

According to the PCRM and others, such as Duke University, the dangers are real and significant. Eating a hot dog every day can increase your risk of colorectal cancer by 21 percent. That’s as bad for you as smoking. And while EHSO has been warning consumers about the scientific correlelation and likely causal relationship between processed meat consumption and colon cancer, in 2015, the World Health Organization’s cancer research arm on Monday declared processed meat a carcinogen, in an announcement that the Washington Post decrsibed as alarming “bacon lovers and sent the beef industry into a furor”. 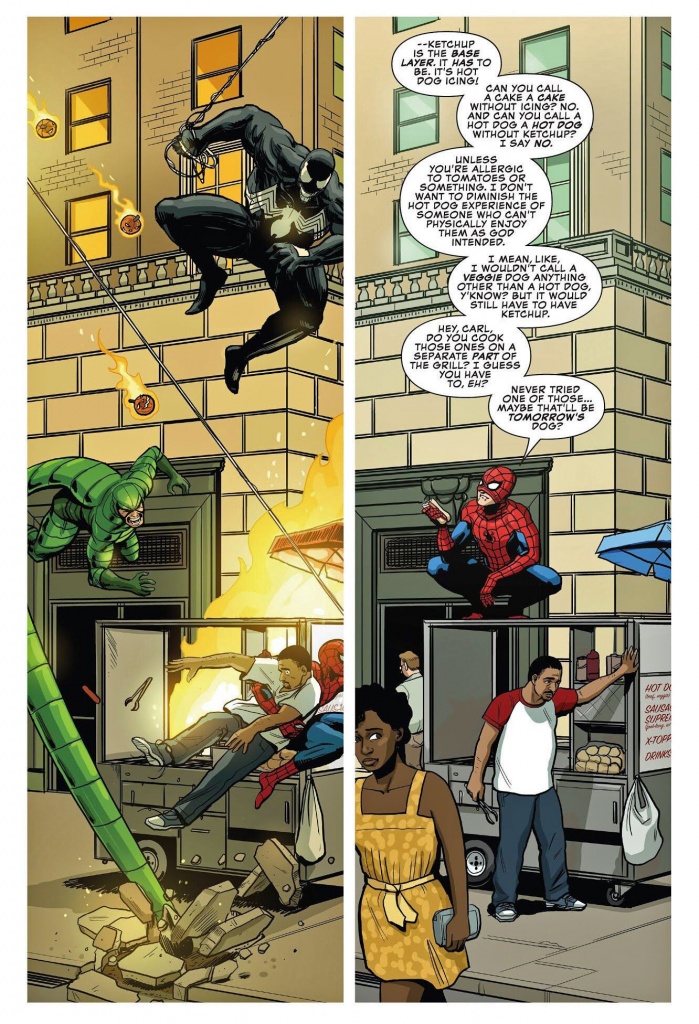 The particular scene presented here offers up a host of ethical and philosophical questions: What is the responsibility of those with power? Is meaning a matter of essence or form? What is a human life worth? What are the limits of gratitude? Can you call a cake a cake without icing? 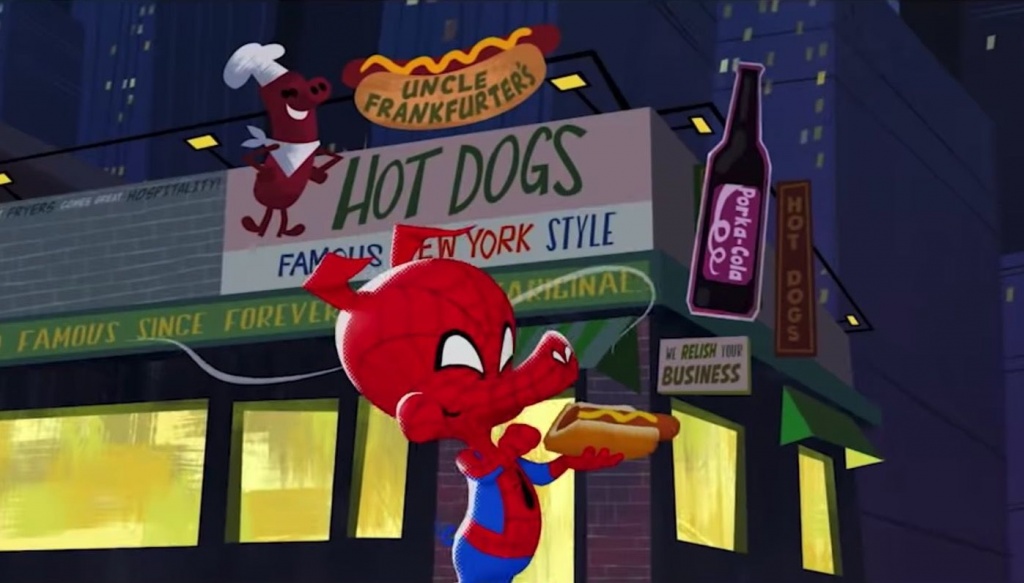 Chef’s Note:  When this prequel came out, many were quick to note that Peter Porker was chomping down what appeared to be a normal hot dog. As pork is a common ingredient in a lot of hot dogs, people then asked the worrying question: “Is Spider-Ham a cannibal?”

Luckily, the producer of the clip was quick to clarify: 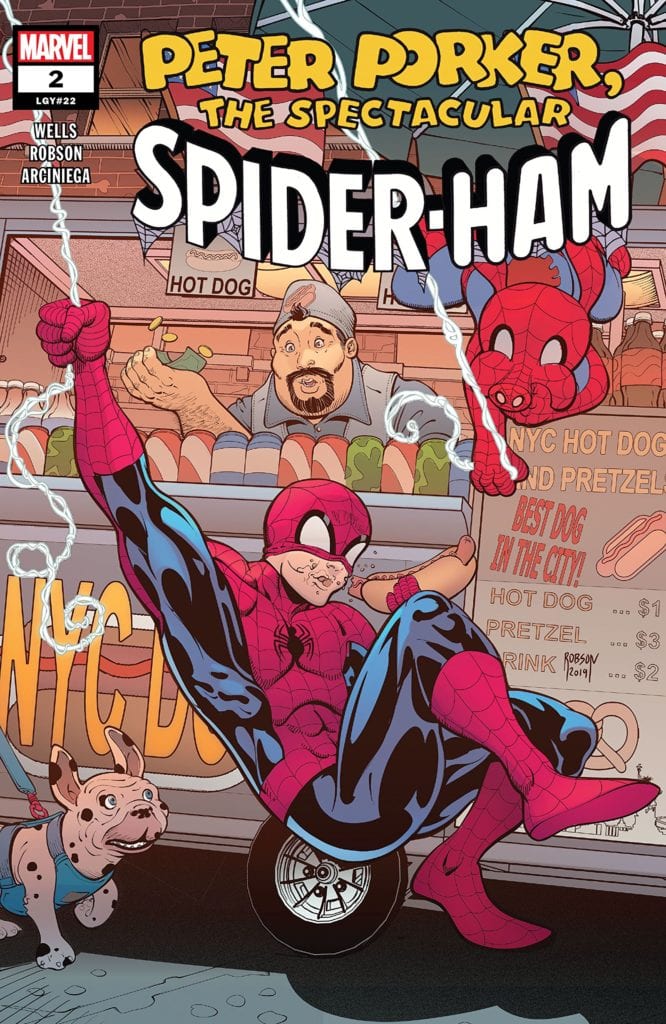 Chef’s Note:  It’s a bit hard to tell what’s going on here. Is Peter Porker also stuffing a hot dog into his face like Peter Parker is doing? Or is he trying not to vomit, because Peter Parker is scarfing down probable pork product? The dog seems confused as well, do I don’t think it’s just me.

At least it appears that Peter actually paid the vendor this time.

Variant Cover Artwork by ???
Any info is appreciated. 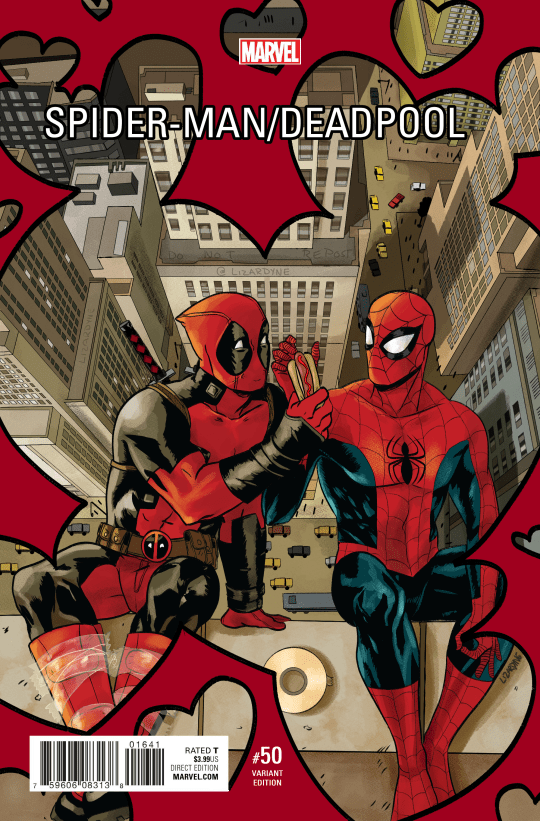 Chef’s Note:  At first glance, this is just such a sweet scene – Wade offering Peter his favorite food. Aw.

But then suddenly one notices the perspective and what the? Apparently, Peter can cling to surfaces with his… buttocks? That’s a new one on me. And then you see the roll of tape and realize Wade has taped his lower legs to the ledge. Did he do that all while holding a hot dog? That is true love indeed. 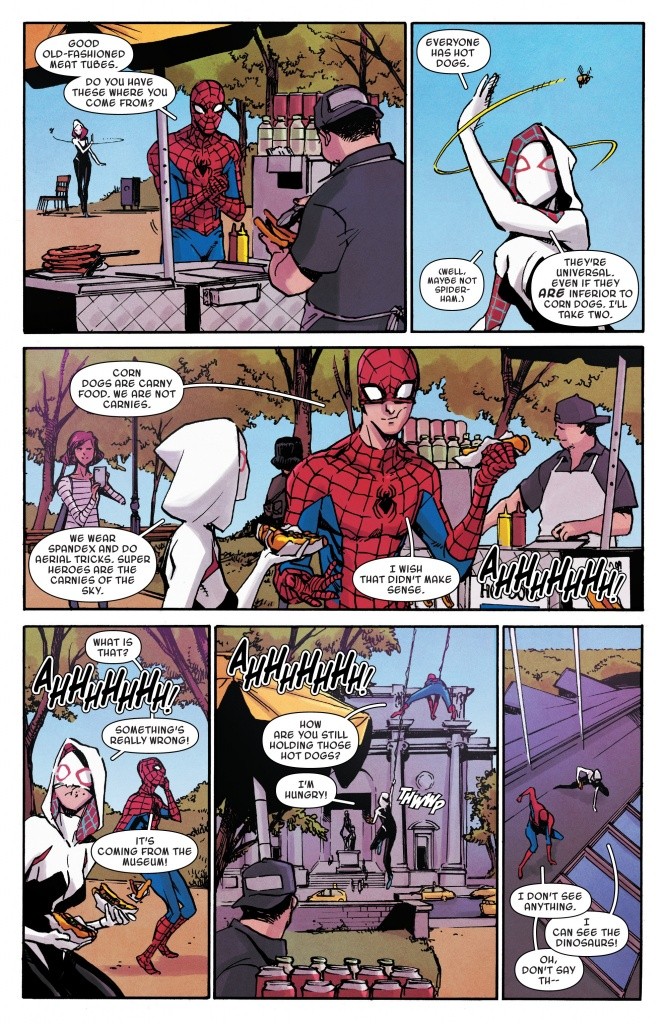 Chef’s Note:  Here we discover that Peter, noted junk food junkie, apparently is a bit of snob when is comes to hot dogs. Although, he is not incorrect that corn dogs are carny food-

Corn dog lore has it that George Boyington, a concessions vendor serving tourists in Rockaway, Ore., hit a breaking point over Labor Day weekend in 1939 when the rain ruined his stock of hot dog buns.

Boyington was a reformed bootlegger who had spent years smuggling liquor into Michigan from Canada; he’d moved to Oregon to clean up his act. As he fed the scraps of his ruined buns to the seagulls, he bemoaned his plight. If only there was a way to cook buns on the spot, as they’re needed.

That spark of an idea grew, and thus, the corn dog was born — a deep-fried solution that was portable for vendors and pleasing to taste. “Dun in a bun,” the early slogan promised. Boyington dubbed it the Pronto Pup for the speed of the cooking process.

Boyington and his wife, Versa, trademarked the Pronto Pup name in 1942, and began selling franchises of the carnival treat.