Chef’s Note:  This scene poses a potent metaphysical conundrum: It is asserted (quite forcefully) that “Batman does not eat nachos” but then immediately afterward we clearly see Batman most definitely eating nachos.

This is an excellent example of a No True Scotsman argument being shut down: Angry Batman declares that “Batman does not eat nachos” and then Stoner Batman brazenly eats nachos right in front of him (while kicking back, of course, because he’s quite relaxed and comfortable with his snack choices).

So then Angry Batman will try to point out that Stoner Batman cannot really be Batman because, as asserted earlier, contrary to all visual and current evidence, Batman Does Not Eat Nachos.

As such, since Stoner Batman is obviously eating nachos, ergo he is not Batman.

And yet, Stoner Batman keeps on eating nachos. 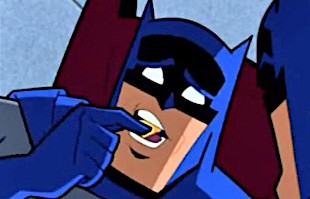 Yes, The No True Scotsman argument is a dumb one.