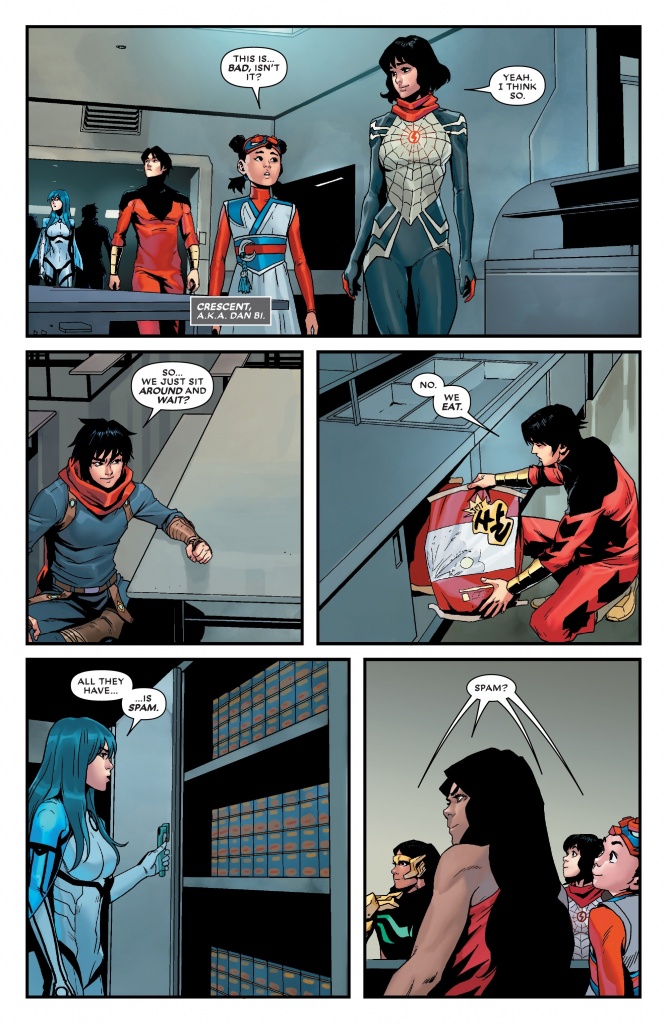 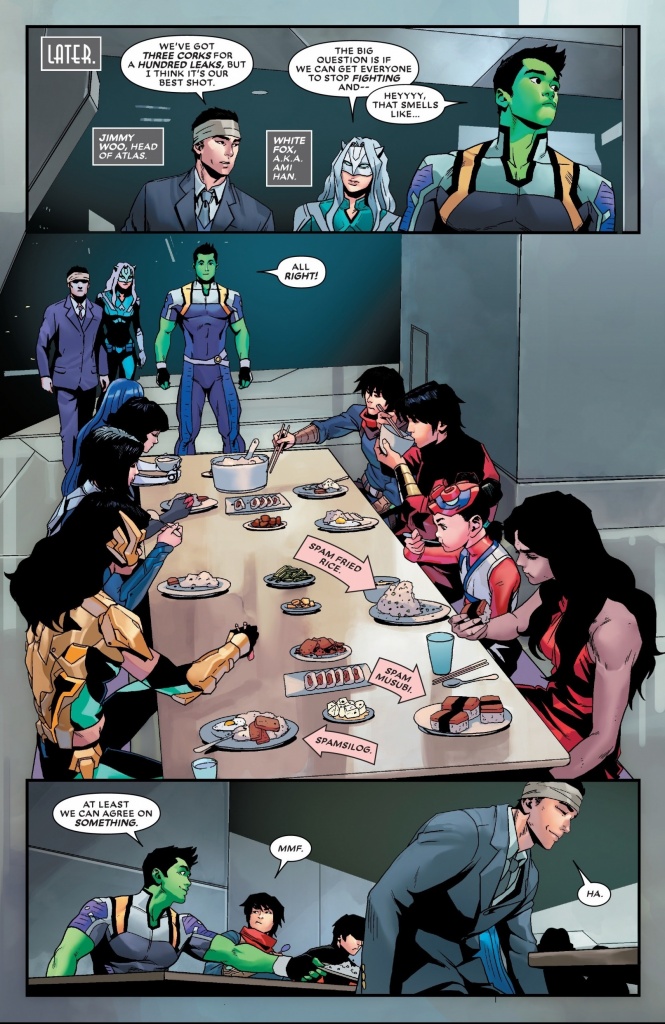 Chef’s Note:  This short scene is a capsule history of spam in the post WWII Asian Pacific world.

Forced to make a meal out of what’s found in a military-style bunker, each hero draws upon their own culinary traditions to transform some very basic foodstuffs into a delicious feast. From Korea to the Phillipines to Hawaii – they all did the same thing: created comfort food* out of the chaos of war. An extraordinary feat.

After the bombing of Pearl Harbor, the American military was deployed to the Pacific, and troops made their way to places like Guam, Japan, the Philippines and South Korea. Wherever American troops went, Spam followed says Robert Ku, a professor of Asian American Studies at the State University of New York at Binghamton…

But the food brought with it a complicated set of meanings. With mass destruction having created food shortages and the U.S. participating in rebuilding the region, Spam became a symbol of American generosity in helping feed the people, Ku says. At the same time, however, it was a reminder of immense suffering.

In the Philippines, people were fleeing from Japanese invasion, and resisting its occupation from 1941 to 1945, when they were first introduced to Spam. On some Pacific Islands, Spam became a necessity for survival for many local residents due to food rationing and restrictions during the war. And for many Japanese Americans, their love for Spam began with one of the most painful memories, Ku writes in his book: The U.S. government sent canned meat to the incarceration camps where people of Japanese descent were forced to relocate and later detained from 1942 to 1945.

During this period, Spam began to make its way into local dishes. Barbara Funamura, a Japanese-American woman from Hawaii, is credited with having invented Spam musubi, a slice of grilled Spam on top of a block of rice, wrapped together with nori. A similar narrative repeated itself on the Korean peninsula during the Korean War: People would rummage through the leftovers of the American military bases and create a dish using items they found. The dish, known as budae jjigae or army stew, combines traditional Korean ingredients, such as kimchi and rice cakes, with American “novelty,” like Spam and American cheese.

* Whereas their American counterparts came up with such notable culinary creations as Baked Bean Spamwiches (complete with a “man-style salad”). 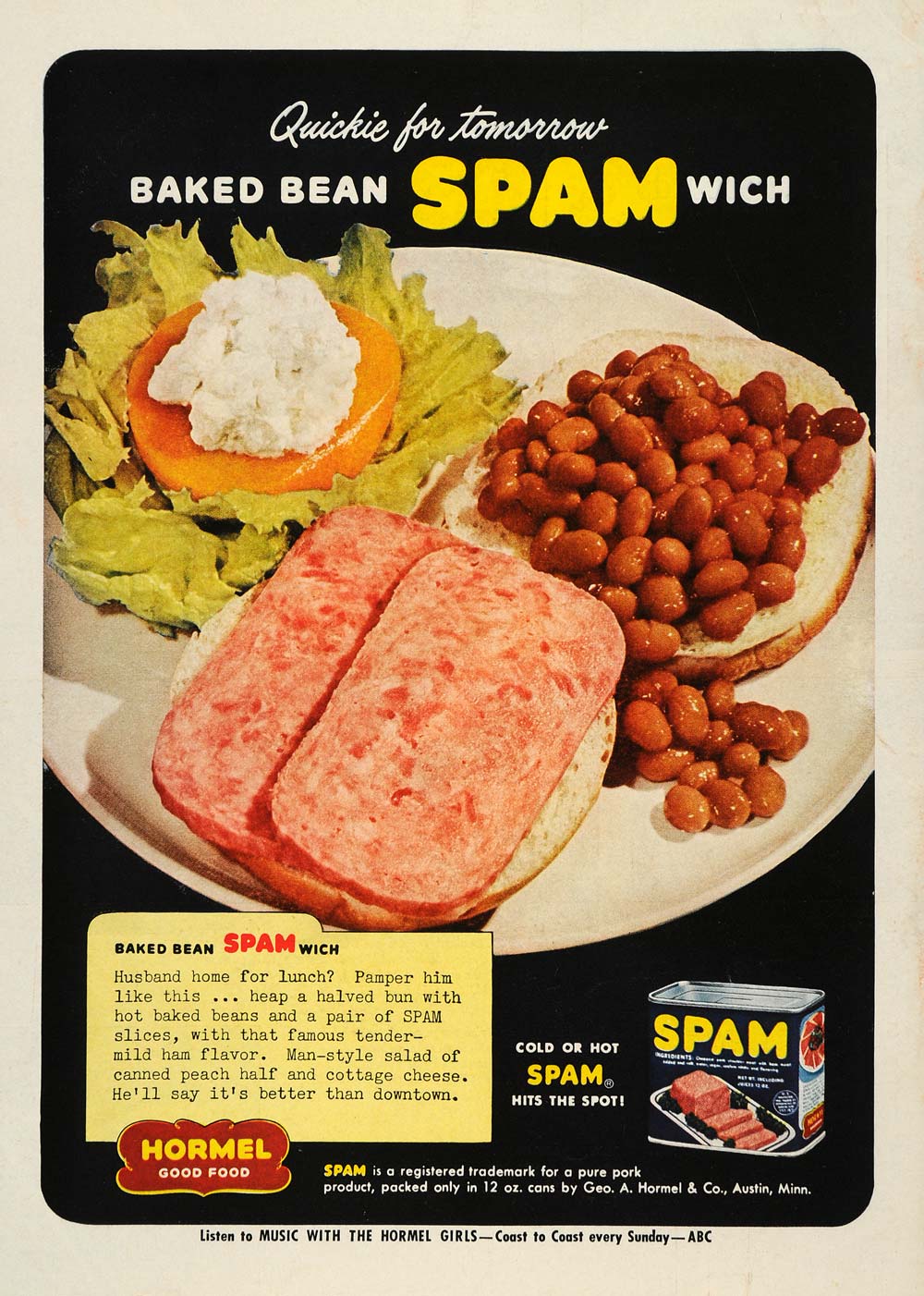